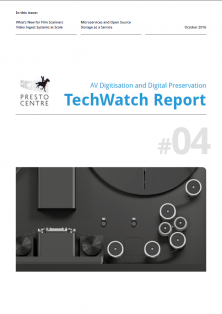 The IBC, or International Broadcasting Convention, is Europe’s largest professional broadcast fair. Held annually in September in Amsterdam, the trade show saw a record year in 2016, with 56,000 in attendance over the five days of exhibition and conference activities. The buzz at the show was that things are picking up again after the disruption of the past decade, where the financial turbulence and technological shifts exerted great pressure on the audiovisual business sector across the world.

Big numbers were not just a feature of conference attendance: they were to be found in many of the new products on show, with new benchmarks being set in terms of production video file formats, scanner imaging resolution and storage capacities. Happily, smaller numbers were also to be found, with prices continuing to fall in key product areas. At IBC in 2016 we saw companies continuing to innovate and deliver interesting solutions to support archives in leveraging digital technologies for both preservation and access. There was evidence of technology vendors actively engaging with open source tools and microservices in their products and workflows to limit costs, deliver greater efficiency, and increase flexibility and control.

For this fourth report in the TechWatch series for audiovisual archiving, we took a close look at film scanning developments, systems for video ingest, the potential of microservices and storage providers. The scale of the IBC show and volume of exhibitors means that it is not possible for us to provide an exhaustive list of vendors who were exhibiting new products and innovations in the specific categories we cover in this edition. Certainly, there are many other companies who offer great film scanning, video digitisation and storage technologies that were in evidence at the show and we look forward to perhaps covering their products in future issues!

PrestoCentre’s TechWatch Reports identify the business issues and technology trends that exist in digital audiovisual archiving and bring clarity in a language that is accessible to nonspecialists.